The Chandrapur situation: Thoughts on waste management situation of Guwahati

The quantity of municipal solid wastes generated in urban centres of Assam has been consistently rising over the years. Guwahati, the gateway to North-East India, is the largest urban agglomeration centre in the region with a population of 1.1 million (2020). The city is situated on the banks of the Brahmaputra surrounded by the Himalayas. Rapid unplanned urbanisation and an increase in domestic population, floating population, and increased economic activities coupled with unpreparedness have resulted in mismanagement of various issues related to the environment such as waste, sanitation, and water management. This has affected various eco-sensitive zones in and around Guwahati have suffered severely in recent years. A study by IIT Guwahati in 2011 has shown the average waste generation rate in Guwahati is 0.416kg/capita/day[1] while another study in 2018 claimed the average waste generation per person per household is 0.175kg/day[2]. Though this might seem to contradict, the first study refers to the total waste generated by the city with regards to each one of us while the second talks about how much each one of us produces waste at home. This excludes everything beyond our household boundary.

Waste generation rate study for other urban areas in the state is yet to be conducted. Recent studies across the state show lack of assessment and monitoring within the waste management structure. There are no proper methodologies in place by any municipality to estimate waste generation, characterization and collection.

Guwahati now generates approximately 550 tonnes per day (TPD) of solid waste — more than 85 per cent finds its way to the dumpsite located at Boragaon, beside Deepor Beel, a Ramsar conservation site. Apart from the dumpsite, numerous other small garbage vulnerable points can be seen in the city. A windrow technology compost plant of 50 TPD in Boragaon. It has been functional since 2010, and a proposal for augmenting its capacity to 200 TPD has been proposed[3]. Due to the low capacity of the compost plant facility, most of the waste is dumped in the open spaces beside the Deepor Beel. This has severely affected the health of the entire wetland. Once a major site for migratory birds has now been converted to a dumpsite thus damaging the entire ecosystem. The proof of destruction is the reduced number of reported sightings of migratory birds in recent years. This is the result of Guwahati Municipality Corporation (GMC) lack of responsibility and incompetence towards conservation of the environment. This does not simply apply to GMC but extends to other municipality boards and councils in the state. No wonder, Assam was among the least ranked states in the latest Sustainable development goals report released by NITI Aayog. 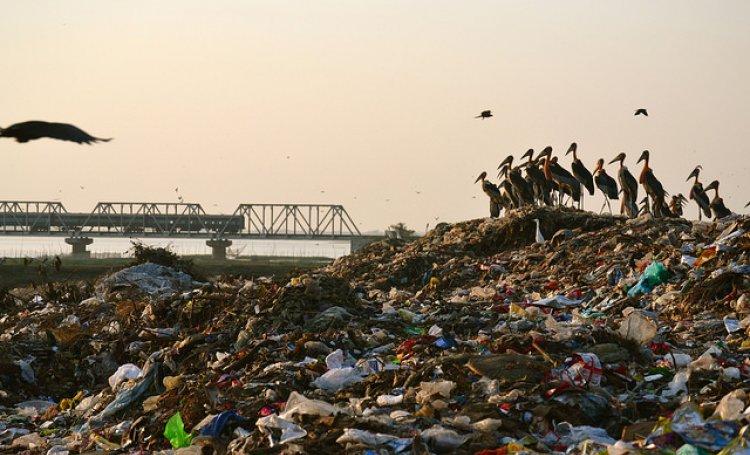 It was in 2014 when the issue of open dumping of solid waste was raised by an environmental activist for the first time who filed a petition in the court, seeking an immediate end to the disposal of sewage at the Boragaon open landfill. On April 29, 2019, National Green Tribunal (NGT) has instructed GMC to shift the waste disposal ground with immediate effect. Within 5 months, GMC signed a Memorandum of Agreement (MoA) with Assam Power Generation Corporation Limited (APGCL) to set up an Integrated Solid Waste Management Facility (SWMF) along with a Waste-to-Energy plant on its land. The MoA mentioned that the waste disposed of will be scientifically treated and then stored. In the National Green Tribunal (NGT) ruling dated February 11, 2020, Chandrapur was one of the four sites assigned to GMC to build the SWMF on the defunct Chandrapur Thermal Power station premises.

Post the second wave of COVID-19, when the situation became a bit relaxed, GMC decided to shift the waste dumping site from Boragaon to Chandrapur on 28th June. However, the construction of SWMF, which was mentioned in the MoA, has not yet started. At present, GMC is dumping the waste in open spaces without much treatment, in a completely non-scientific manner. The residents of the Chandrapur have been protesting against it.

The protest started when GMC decided to shift the dumping ground location to Chandrapur in 2020. At that time, the officials pacified the situation by assuring the citizens about the construction of the integrated SWMF before shifting the location to Chandrapur. As reported by The Wire[4], as of 22nd July 2021, no authorization letter has been received from Assam Pollution Control Board for the Chandrapur site.  Following the government’s move to dump the wastes in the Chandrapur site, a PIL (Public Litigation Case) was filed by Mr Pradeep Baruah, following which the Court has directed the State government to provide details of the waste-management plant that the government proposes to construct at the site of the dumping ground on 20th July. The next hearing is scheduled for 4th August.

On the environmental aspect, the current Chandrapur site is in close proximity to the Kopilli river, a tributary of Brahmaputra. There is a high probability that open disposal of waste would find its way to the Kopilli river. Moreover, the site is only 500 meters from Amchang wildlife sanctuary and 2 km from Pobitora wildlife sanctuary, both of which are ecologically sensitive zones. All these sensitive zones will be largely impacted by the waste disposed of in the Chandrapur site.

Moreover, the open burning of wastes means the release of toxic compounds, harmful and lethal to humans, wildlife and vegetation in the vicinity. Incinerating or burning waste releases toxic gases like Dioxins, Furans, Mercury and Polychlorinated Biphenyls into the atmosphere. Polystyrene harms the Central Nervous System. Hazardous brominated compounds act as carcinogens and mutagens. Dioxins settle on the crops and in our waterways where they eventually enter into our food and hence the body system. These Dioxins are the lethal persistent organic pollutants (POPs) and cause cancer, neurological damage and disrupts reproductive thyroid and respiratory systems. Thus, the burning of plastic wastes increases the risk of heart disease, aggravates respiratory ailments such as asthma and emphysema, causes rashes, nausea or headaches, and damages the nervous system. The impact is not just limited to Chandrapur or the vicinity, it also affects Guwahati being downstream of Chandrapur.

What can we do?

Guwahati, under its current waste management infrastructure, will not be able to fulfil its potential as being sustainable or the first smart city in northeast India. One of the most important requirements for better waste management is waste characterization and segregation. If we characterize our waste we will be able to understand how to recycle, reuse or upcycle them. Guwahati till now has less than five waste characterization studies to fully understand the scenario as well as to have a fair estimation of waste with lower uncertainty of results. An estimation in 2012 has shown that the city has the potential to generate approximately 30 MW of power from solid wastes[5].

The lives and health of the Chandrapur people are affected by our waste. They have to face a disaster where their share of responsibility is less than ours. Rather than pressuring our waste into landfills or incinerating units, we should try to mitigate some of the waste ourselves as a whole community. Here we would like to introduce the concept of community management of waste along with the municipal bodies. There is also some other utilization of solid waste like composting or generation of bio-methane according to their chemical and physical properties. Converting wastes into wealth, we shall enhance social, economic and environmental efficiency, and promote sustainable development.

Societies and local resident welfare can collectively use bio-degradable waste for electricity generation. This way we maximize return on our investment, e. g. energy from the food. Though the biodegradable waste shall be utilized by APDCL later to generate electricity, there are several losses in this respect. Firstly, transporting electricity from Chandrapur means loss of energy in transmission. Secondly, a number of vehicles are used for transporting waste. This means another set of transportation polluting the city and area. Thirdly, we use and destroy a large area that has the potential for other economic gains. Fourthly, if we combine these reasons we can see a huge economic loss for the society where we are losing out on resources and paying them to be incinerated.

Citizens of Guwahati should take up waste segregation seriously. GMC should also look for local solutions, teaming up with the citizens. Integrated waste management is possible only when we have waste characterization, segregation and plants for recycling or upcycling. Currently, Guwahati as well as other towns of Assam cannot boost such measures and infrastructures. Neither do we have any market strategies to incorporate the waste back into the economy. Without proper plans and strategies, it is impossible to return back from a non-scientific dumpsite to a scientific dumpsite. Guwahati is growing and each day we add more than 550 tons of garbage into the dumpsite. If GMC cannot start scientific management of waste by end of August 2021, the site will have a similar scenario as Boragaon with more than 30,000 tonns of waste. If all waste is routed to Chandrapur, it would be impossible to segregate and hence burning will be the only option.

Sagarmoy Phukan is a PhD scholar at Stockholm Environment Institute – York (SEI-Y), University of York, UK. He is currently working on citizen science and environmental monitoring in India for evaluating the SDG performances. He is also one of the editors of NEDA Blog.

Aditya Bhuyan is currently working in Confederation of Indian Industry (CII), New Delhi as a Research Analyst in the field of Air pollution. He has worked in projects like ‘Cleaner Air Better Life’- a national platform dedicated to bringing ecosystem level changes for improving the air quality in India along with ‘Crop residue management’ project in the North-Western States.